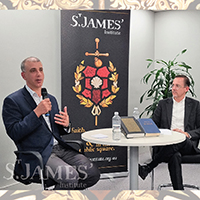 The St James’ Institute presents: A Muslim’s View of Jesus & A Christian’s View of Muhammad

Allah raised Jesus up unto Himself, and Allah is Mighty, Wise (Quran 4:158)

According to various Islamic traditions, Jesus (Isa) will one day be buried alongside Muhammad in Medina. Other hadiths describe the two prophets meeting in heaven. These reports suggest a kinship – if not equality – between Jesus and Muhammad.

This seminar will explore similarities and differences between the one the Quran calls “God’s Word bestowed on Mary” (Quran 4:171) and the one the Bible may predict as a “Comforter” sent from the Father (John 14:26). However, this interreligious dialogue will not propose a 1:1 analogy between Muhammad and Jesus. Instead, it will experiment with cross-tradition appreciation. A Muslim theologian and a Christian scholar will respectfully and candidly delve into each other’s faith, and the surprising overlaps between these monotheistic religions.

The dialogue will be moderated by Professor Emerita Alanna Nobbs AM.

Mehmet Ozalp is an Islamic theologian and founding director of the Centre for Islamic Studies and Civilisation. Aaron Ghiloni is the author of Islam as Education (2019) and editor of World Religions and their Missions, second edition (2022). Both are experienced leaders of interreligious dialogues and members of the Centre for Public and Contextual Theology.