There are many ways in which the Parish of St James’ contributes to the life of the city of Sydney, and there are many ways for you to be involved. Please fill in the form below to enquire about the activities listed here. The New Parishioner / Parishioner Update Form is located at the bottom of this page.

In the year 2000, a group of people started to look into putting in a ring of bells at the behest of the then Rector, Richard Hurford. The tenor for the church was donated through the Keltek Trust. This bell, a 10cwt 1785 Rudhall casting, had previously been hung in the former church of St Paul, Bristol. Bristol was notably the former home of St James’ architect, Francis Greenway, and has always been a noted centre for bell-ringing. The remaining seven bells were cast by Taylor’s Bell Foundry in Loughborough, Leicestershire. Due to the configuration of the steeple, the bells could not be hung in what normally would have been the belfry. Instead, the bells were hung one level lower, behind the roof of the church, in what would have been the ringing chamber. The ringing room is in the antechamber to the gallery. A nicer environment for ringing, this level has stained glass windows and doors into the church so the ringers can see what is happening in the service. It is one of the most accessible ringing chambers in Australia with a lift to the church level, and a staircase to the ringing room. The bells are named after people of the early settlement and the early days of the church. The names and weights of the bells are as follows: 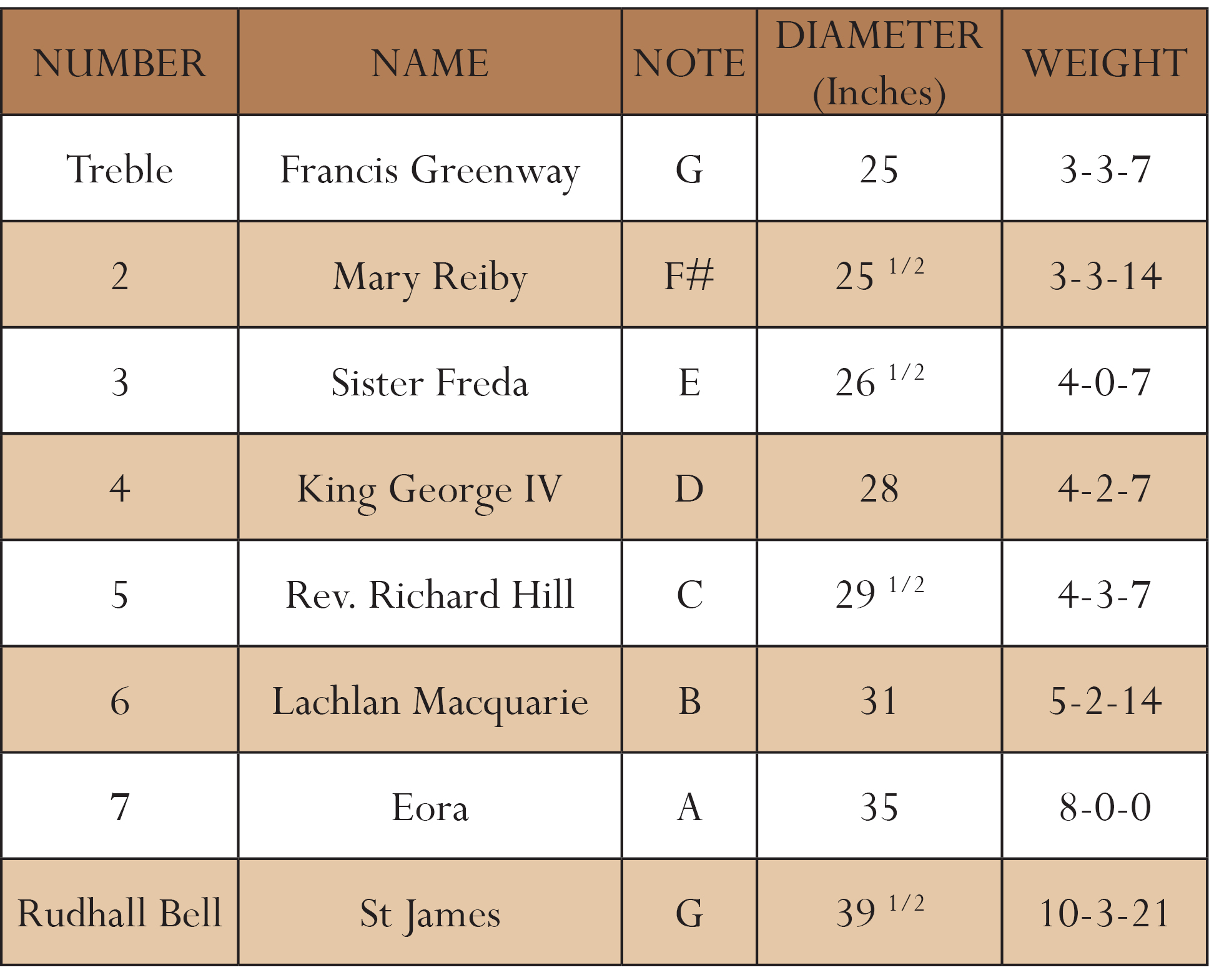 On Sunday, 27 July, 2003 on the Sunday in the Octave of St James’ Day, in the presence of His Grace, the Most Reverend Ian George, Archbishop of Adelaide, the Rector, Father Peter Kurti, dedicated the Bells to the glory of God. Later, at a Parish Luncheon, certificates were presented to major donors to the project. Following the luncheon, a quarter peal of St James the Great Delight Major was rung.

The bells are usually rung prior to the 9:00am and 11:00am Sunday services, at some Evensong services, and at special festival services. The bells can be booked for weddings, funerals and other special occasions by arrangement.

The St James’ Guild of Ringers is growing and practises regularly. Beginners and experienced ringers are always very welcome.

The Guild of St Raphael

The Guild of St Raphael is a fellowship originating from within the Anglican Communion. It is dedicated to promoting, supporting and practising Christ’s Ministry of Healing as an integral part of the life and worship of the Church, particularly at the local level; working for the wholeness of the person and of the communities in Christ, through prayer and intercession, the use of the sacraments and other healing actions; and through theological education and research, in co-operation with the medical profession and others engaged in the work of healing.

At the Eucharist, the names of people seeking help are read out and offered to God. Our prayers are not just for physical healing but for wholeness – the healing of body, mind and spirit. Physical healing may not take place but God will certainly be with that person. Should the person seeking help wish for confidentiality, their name will be placed on the altar and not read out aloud. Members of the Guild of St Raphael intercede daily for those asking for prayers. In order to put a name on a prayer list, the clergy need to be advised either personally or through special forms which can be filled in and placed in a marked box, all of which can be found at the entrance to the Chapel of the Holy Spirit in the Church. Anointing and/or the laying on of hands is offered after the 12:30pm Eucharist every Thursday.

Home or Hospital visits by the clergy can be arranged by appointment who can offer the desired assistance. Please fill in the form below or phone the Parish Office if you require a Home or Hospital visit by one of the clergy. It is essential to remember that you have to make your needs known before any help can be offered.

A team of volunteers visit Sydney Hospital on a rostered basis, continuing the ministry of care to those within the Parish of St James’.  If you wish to volunteer as a St James’ Hospital Visitor, please fill in the form below or contact the Parish Office and you will be put in contact with the Hospital Visiting Coordinator.  Training is provided.

English Benedictine monk, Dom John Main (1926–82) revived the ancient Christian tradition of meditating on a single sacred phrase. Using such a phrase creates a means of turning our attention beyond our thoughts, our concerns, and ourselves. The phrase which John Main recommended is “Maranatha”. It is in Aramaic, the language Jesus himself spoke, and means ‘Come, Lord’. It is probably the most ancient Christian prayer: St Paul ends Corinthians with it and St John ends Revelation with it.

Cost: There is no charge.

In response to a need expressed by our local community, St. James’ Church offers a socially inclusive and non-faith based professional counselling service with Loretta King as part of its new outreach ministry to the city.

Loretta King BA Grad Dip MCAP (Couns & Psych) is a graduate of the University of NSW and the Jansen Newman Institute of Counselling & Applied Psychotherapy. She is a clinical member of the NSW branch of the Counselling & Psychotherapy Federation of Australia (PACFA NSW). She is experienced in working with individuals, couples, families and groups (of all ages) in areas of mental health, relationship counselling, and life coaching. As an extension to her psychotherapy practice, Loretta conducts singing therapy workshops to facilitate stress reduction, self-empowerment and creative expression.

To make an appointment, please fill in the form below or phone the Parish Office.

Founded in 1899 during an economic depression by Emily Rich (Sister Freda) and other members of the Order of the Sisters of the Church, the Mission has been providing hospitality to disadvantaged people for over one hundred years. Since the Mission’s beginnings the clergy and congregation of St James’ have been closely associated with it.

The Sister Freda Mission provides a lunch each week for the needy every Sunday at 2:00pm; since 1954 this has been in the Crypt.

A team of parishioners prepares and distributes sandwiches, cake, fruit, tea and coffee to about 80 people, and in the cold weather soup is served. Once a year in December, a full Christmas lunch with turkey, ham, Christmas pudding and ice cream is provided. About 250 meals are distributed on this day. The people who come each week have many needs, some of which are satisfied just by the food provided. The opportunity to meet friends is another important need, as is being served by friendly people who are willing to listen to their problems.

Many hands make light work. We need committed teams of people to help each week. Please fill in the form below or contact the Parish Office if you would like to join one of the groups.

The St James’ Men’s Group meets five times each year and has the purpose of providing fellowship and support for men in the congregation and for their friends. It operates without an overlay of specifically Christian practices, so that it is immediately accessible for newcomers.

The meetings comprise a BBQ lunch and a guest speaker. The speakers usually talk for about 10 to 15 minutes and the meeting is then opened for discussion. The speakers have occasionally been members of the St James’ congregation, reflecting the fact that our members have diverse interests and are often involved in interesting activities. A nominal charge is made to cover the cost of food.

Keep an eye on the calendar for when the next meeting is held.

Three teams of volunteers provide and serve refreshments followings the services on Sundays.  Please fill in the form below or contact the Parish Office if you would like to be involved.